The excuse not mentioned

Have you ever considered the times you used the expression ‘not to mention‘? It is an interesting phrase and it is overwhelmingly used to give rise to excuses or reasons of a listing. Yet the act of not mentioning issues has a much larger reach. This gets us to the usage of Embargo, now in the true spirit of embargo is needed to not give rise to dangers. I have seen my shares of embargoes all over the world, I have never been personally privy to one, but I understand and accept the reason. The most accepted form is a ‘requirement by a government agency that the information or news provided is not be published until a certain date or certain conditions have been met‘, it makes sense that the news of drug deals are not broken until the undercover agent is out of harm’s way, the famous raid on Entebbe (Operation Entebbe), had to make certain that in those days spotters would not voice what they saw whilst the plane was in flight; fortunately for the Israeli Defence Force (IDF) they have an above average security in place, so not much chance of that, yet with the 1977 Dutch train hijacking that issue was very much an issue, especially as on that very same day there was a touristic event (I believe it was by the AVRO), that took us to almost exactly where the train was, whilst that morning Dutch Marines were ordered to settle the matter. Good luck with an embargo at that point. If there was a smartphone in those days, the event might have gone very differently. In that same trend, the events that are on route involving the Credit Agricole would prefer some kind of embargo, but governments cannot play that card, so some players (like some banks) will have to rely on other means, and as we are only drip-fed issues on the Russia Money-Laundering Scandal, we will have to await the media friends of outlets, to see what is allowed to be released.

Yes, you heard it correctly, what some people allow to be revealed to you all. They would hide behind optionally claimed issues like: “We ran out of time“, “there were other pressing matters“, or my favourite “We did not think it was interesting“, it is in that light that media enforced embargoes take another turn.

Is it not interesting that the Boston globe gives us: ‘US can’t keep turning a blind eye to Saudi Arabia’s murderous prince‘, yet based on what evidence? That UN essay is not the evidence we should regard as actual evidence. We see in addition Al Jazeera give us: ‘UN again blacklists Saudi-led forces for Yemen child killings‘, yet in that light in opposition the news is not giving us: ‘Yemen’s Houthi rebels attack food factory in Hodeidah‘, which was reported 12 hours ago. 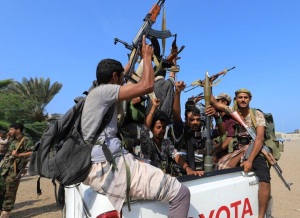 So in a place where famine is a direct threat to hundreds of thousands, the Houthi terrorists are aiming for civilian population and destroying places that produce milk and fruit products (juices, cheese, yogurt), essential food for the people of Yemen and the Houthi forces are shelling that place as well as residential areas of Hodeidah city last Saturday. Yet the western news to the largest extent did not give us any of that, did they?

The fact that we see news avoided to the largest degree is becoming an issue, the people are not being informed on what is going on, and when we do get informed, there is a veil that depicts the Kingdom of Saudi Arabia (as well as the UAE) as: ‘the big nasty’, whilst the actions of Houthi terrorists as well as the facilitation by Iran is not mentioned at all, and this has been going on for months now. When we consider one source (Times of Israel, at https://www.timesofisrael.com/yemeni-houthi-rebels-long-range-arsenal-grows-lethal/) we see: “In June alone, the Iran-aligned Shiite Houthis launched at least 20 missile and drone attacks on the oil-rich kingdom, Iran’s regional foe, some resulting in casualties and damage“, in addition we see: “A Yemeni army retired brigadier, Jamil al-Mamari, believes the “Houthis are not capable of manufacturing missiles in Yemen… They are only capable of assembling and modification.”“, the growing evidence from several sources on the incapability of Yemen to produce Iranian hardware is ignored by the Western Media all over the place, including the bigger accusation: “Experts rule out the possibility that Houthis may have modified these arms on their own“, a simple deduction that could have been made by a 4th year engineering undergrad student, and yes, the media ignores this, we are sold a bag of goods through business driven embargo’s, just like the issues seen in Syria, the people are left for dead and illuminating merely part of the equation is making the western media guilty of a few facts, even subverting the old premise: ‘the people have a right to know‘ into: ‘We are guided by some to tell you what you optionally need to know‘.

I wonder what will happen when I decide to give out the messages, mails, events and connections that are in existence between people like Raphaël Appert and Daniel Epron, with all the media links they have, and they have a lot. So when we look at some of the Russia Money-Laundering Scandal that have been known to some extent and all the papers that decided not to give visibility to that part, what excuse will we be told? There was a revolutionary Apple message that bumped the revelation? Or perhaps the economic plan of President Macron took all the space available? I do not know, I am merely speculating, but the lack of visibility on some of these news events all over the place, are now a much larger concern. When we look at the papers that actually took space and time to look into the Iranian Qasef-1 missiles and their targets, how many papers took time to look into that? The list (the lack of papers there) will surprise you. Oh and the excuse that it was merely a copy of the Iranian Ababil-2 drone will not work, I checked for both. In that same air, when searching for the Russian Money Laundering Scandal, we see the mentions of the Deutsche Bank, but several others like for example Credit Agricole, they did not make it to the news, not in the Guardian and not in several other papers. Revelations that are filtered are not revelations; it is merely corporate forms of censoring and it is my speculation that we get more and more of that as the year progresses.

As I have state in the past, I believe that news is filtered for publication as long as it is filtered through the Shareholder filter, the stake holder filter and the advertiser filter. What is left is ranked according to emotional ability to flame and push people. When we look at Turkish Journalists (in light of the large amount of them in prison) in the google News section we get: ‘About 163,000 results‘ (for all those journalists mind you), yet when we see: ‘About 725,000 results‘, which is in the same section, it is about Jamal Khashoggi, so we see that not all journalists are equal, not by a long shot (even as dozens of Journalists have been murdered in Turkey). These are all elements that give a view to the filtering of information that we get, and when you consider the excuse that ‘there was no space’ consider that there is no space limit to online news. And for the most it is not about resources, it is about that they consider we should know.

When we search news for ‘Hodeidah‘ in the last 24 hours we get 4 hits, two on the Shelling of the Dairy factory (Xinhua and Al Ain) one Blog and one by Yemen Online on ‘The opening up of Hodeidah port to ensure a better flow of humanitarian aid‘, that’s it, nothing more according the Google Search, so any excuse that the West is giving us some level of balanced news is a joke, and at present a bad one at that.