Corona?  I Never touch the stuff!

There is a lot happening here. New Zealand has closed its borders for people coming from China. The death toll climbing to 360, creating more death than SARS did (only 349) and I see here in Sydney a larger population in facemasks which is partially hilarious and China’s Global TV network (CGTN) Tweeted “Central China’s #Hubei Province, the epicenter of the #coronavirus outbreak, reported 2,103 new cases of the infection on Sunday, bringing the total number of confirmed cases to 11,177 in the province. more: https://t.co/HbG7VtIQbH pic.twitter.com/XLAmlgtVpI“

This made me look out, as there were only 6800 cases when I wrote about it 3 days earlier. Also when we see the bells tolling 300 dead a day ago, we see a larger shift, this becomes more visible when we consider the New York Times a mere 5 hours ago ‘Wuhan Coronavirus Looks Increasingly Like a Pandemic, Experts Say‘, to be honest, I am not entirely sure why experts give the “is now likely to become a pandemic“, I mean, it was not rocket science, I gave the defenition in ‘Just like in the movies‘ (at https://lawlordtobe.com/2020/01/30/just-like-in-the-movies/) where I wrote “Each country where one person stated ‘Not me, I merely have a cold‘, that person will infect dozens more each day. That is how a pandemic starts. Let’s be clear, the term pandemic means an epidemic of disease that has spread across a large region (including multiple continents).” As such the pandemic stage had been surpassed 3 days ago, consider that it was then (among other places) in  Hong Kong, the United States, Australia, France, Germany, Canada, Finland, and the United Arab Emirates, pretty much every continent was covered. So far it seems that Russia does not have it, but I reckon that is merely the ostrich with its head in the sand syndrome.

In all the statistics on this are also a problem, the information is all over the place and as one source gives 12036 infected, another gives 14550 infected, as such there is a time line that does not always match up. The BBC actually covers that in ‘Doctors fight back against misinformation online’ (at https://www.bbc.com/news/blogs-trending-51327671), where we see: “With viral misinformation about the deadly coronavirus in China spreading rapidly online, some doctors and scientists have taken to social media to fight back against false reports.” It merely shows that Facebook can spread ‘social news’ faster than any rumour could travel. Yet in this, it is more than not likely that the retweeting of older news and news from unconfirmed sources by Twitter will aid in this madness.

Chinese news outlet, Tencent reported on the cases in China, as per their stage it is ‘deaths at 361 and confirmed infections in China at 17,238‘, yet beware, this is for China, there are now close to two dozen nations with confirmed cases. The one from Sweden is perhaps the most illustrative one. “The patient is a woman in the Jonkoping region of southern Sweden who had visited the Wuhan area of China. She sought medical attention after arriving in Sweden on Jan. 24. “One case doesn’t mean that we have a virus outbreak in Sweden,” said the agency’s Karin Tegmark Wisell, who added that the country’s health-care is well prepared to deal with the virus.” I do not disagree with Karin Tegmark Wisell, yet she was a carrier and passing on the disease before the patient knew she was a carrier, as such she would have been in Arlanda (most likely), then a train or a car with stops and for some time she was unaware that she was sick. There is every chance that she infected 3-50 people, depending on how she travelled back and the 24th was before the madness began. Now, my 3-50 is highly speculative, but I have been to Sweden, I know the airport, the cafe’s, the train station (if she went per train). The article by Bloomberg was given last Friday (at https://www.bloomberg.com/news/articles/2020-01-31/sweden-reports-first-case-of-confirmed-coronavirus), yet Swedes get colds all the time and before the news they might not have realised that it was the Coronavirus.

However, the Wall Street Journal throws fuel on the fire with ‘The outbreak of novel coronavirus appears more contagious than seasonal flu and is on par with SARS in 2002 and 2003, studies say‘ (at https://www.wsj.com/articles/experts-race-to-figure-out-how-contagious-the-wuhan-virus-is-11580672317), we also get “China says that as of Sunday there were 5,142 infected people in Wuhan, the locked-down city where the outbreak began” Yet in light of other news, (Tencent) and other sources we need to consider that Corona has take a large flight out of Wuhan, the numbers do not add up and the confirmed cases that we see as reported by several sources give a very different picture, a picture that implies that Corona is indeed highly contagious, even more so than SARS ever was. In addition the WSJ gives us “The researchers started identifying and collecting cases around the start of the year, by interviewing patients, relatives and other close contacts. They estimated the reproduction number at 2.2 and said that the majority of patients weren’t hospitalized until after five days of being ill.” I cannot vouch or attack the number, because so far all the data seems to set this, yet how many have the disease and are untested? Again the Swedish example, this lady might have been an initial case, and she might have infected others, yet that view comes reality when we see the issue in Spain, there we see “The first coronavirus patient in Spain, a man living on the remote island La Gomera, was apparently infected with the virus after being in contact with an infected person from Germany, the Spanish Health Ministry said.“

My issue is finding a way to properly informing m readers using the best sources available and not making them panic (which is slightly more difficult than I thought). In addition, if you are not in China, freaking out over a person sneezing in the room makes you not cautious, more crazy and that is the reality we face. Here in Australia, an ‘island’ with 20 million people, here we have 12 cases (at present)  4 in New South Wales, 4 in Victoria, 2 in South Australia, and 2 in Queensland. As such the reaction from people here is a little too strong. Yet on the other side we have the ‘better to be safe than sorry’. However, numerically speaking, of all NSW cases were in Sydney, we get 4 out of 6,000,000. The numbers go my way when I say ‘do not overreact’. That is the truth of the matter, yet we also see that too many people are not reacting when they have a cold. The truth of the matter tends to be in the middle of what we face, that has been my view on most issues. 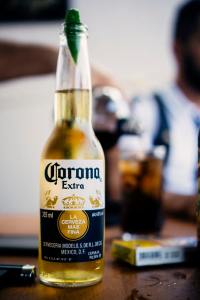 And in Australia we tend to be a little more down to earth, so when someone asked me: ‘what I thought of the Corona situation’, I merely answered ‘I never drink the stuff‘, testing her sense of humour and her lack of accuracy all at the same time (I thought that the event would go different in the end).

Yet, I was making light of a situation that is actually a lot more serious than most think it is, that is what the Scientific American gave us last Friday (at https://www.scientificamerican.com/article/study-reports-first-case-of-coronavirus-spread-by-asymptomatic-person/), as we see “A woman from China infected a person in Germany before she began displaying symptoms“, you might have noticed that I have made several of these claims over the two articles on this, but did you understand it?

That is actually more important than you think, The stage of (what nerds call) ‘First Case of Coronavirus Spread by Asymptomatic Person‘ is the darker part. You see, most people are most often knowingly sick when they spread a disease. They might not show anything, but they have in themselves a part of the disease already eating them (flu like symptoms), this setting is almost unique and it makes the setting of the Coronavirus much harder than anything before (like SARS). As such we see “The infection described in the new paper involved a woman from Shanghai who traveled to Germany for a business trip from Jan. 19 to Jan. 22 and displayed no signs of the disease, which include cough and fever. She only became sick on her flight back to China” and that setting is why I focussed on the Swedish woman and looked at the other cases. Yet the foundation of passing on before awareness is too big of an issue to ignore and I believe that the statement we saw in the beginning ‘is now likely to become a pandemic‘ was the wrong statement. There is a pandemic and we have no solution because this disease works outside of most borders, the fact that we can infect others before we even realise we are sick is almost unheard of and that makes Corona for a much harder nut to crack.

3 responses to “Corona?  I Never touch the stuff!”