Media out of bounds

This time I am at a loss. I know that discrimination and racism are entities that exist, yet until last weekend I had no idea that governments would be condoning it. There is absolutely no other way to see it. There is close to 0% of the educated world that does not know that something horrific happened in New Zealand last weekend, 50 lives were lost. So for the most, the entire planet is capturing the moment for their audience, their readers, or so one would think. 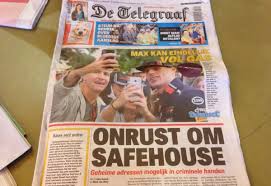 There were some rumblings via Al-Jazeera initially, but I was focussed on other matters. Yet when a friend gave awareness to a front page of what might be the biggest newspaper in the Netherlands, it is time to look at the issue at hand. So this large newspaper (large in size as well) decided to use 2/3rd of a page for a photograph of a formula one racer ending in 3rd position taking a selfie. Now in fairness, it is a Dutch racer, so there is national pride at play, but for a newspaper that always has been on the front seat to blow terrorist actions out of proportions (the emotional drive) to take this step is just insane. As such a 3rd position is more important than 50 dead Muslims killed by a Christian?

Because that is the setting! 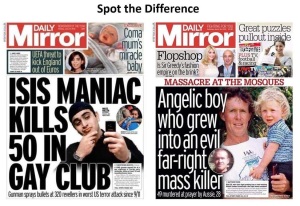 The Daily Mirror made it worse by having in one instance the stage of an ISIS Maniac (a previous event), yet in the case of New Zealand it is an Angelic boy who grew into a mass killer. The images are also staged for maximum effect. So how islamophobic has the Christian world become?

Because if this continue we are merely one step away from the stage where niggers go into the back of the bus, and will anyone react when it happens to the busses in London and the trams in Amsterdam? If this upsets you, good you should be! You need to get angry because this is just insane; to allow for two measurements, one for Christians and one for the rest? Even as a Christian I find that method of measurement revolting.

At least the Sun gave the goods and a lot more, merely on the front page. It should be offensive for the Dutch Telegraaf to be seen as inferior to the Sun, yet they pulled it off that day. I have looked at hundreds of images of newspapers, plenty in languages I cannot read (and cannot state what they say), yet nearly all papers, except the Daily mirror, all saw a monster, a madman and a terrorist, none of them saw some angelic boy reference.

There is something wrong, it has been wrong for a long time, yet this event is probably the first time that the issue gets pushed to the foreground this clearly. I have stated several times (my personal point of view) that the media facilitates to their shareholders, their stakeholders and their advertisers in that order, beyond that the audience gets served. When we take that into consideration, I wonder which individual was so set on getting the Angelic reference printed, the Catholic Church perhaps? As for the Netherlands, a nation filled with business driven needs, the idea that the front page required a 2/3 page for a photo of a driver making a selfie is equally weird. In that view, was it so weird for me to make the claim that the actions in New Zealand are seemingly just the beginning?

This view is only enhanced when we see the Financial Times giving us yesterday (at https://www.ft.com/content/13227c90-487b-11e9-bbc9-6917dce3dc62) ‘Police believe New Zealand shooter may have acted alone‘; the reports in the last 36 hours contradict this strongly. The spread of the manifest, all set to the stage mere minutes from the attack, the stage of reloading, the setting of time until capture whilst the video and stills had been uploaded to a whole range of locations. So when I see: “Security services under pressure to explain why Brenton Tarrant was not on a watch list“, I see a much bigger issue. I think they are aware that he did not act alone, they have no way to find them at present and that is the larger issue. When Mike Bush gives the Financial Times: “He also defended the police response to the mass shootings on Friday, which saw 28-year-old Brenton Tarrant target Muslims praying at the Hagley Park mosque in central Christchurch and then drive about 5km to the Linwood Mosque, where he shot more worshippers“, I will not disagree. This is not something that New Zealand was prepared for, the fact that this person went to a second place is a larger issue and when we see: “within 36 minutes we had that mobile offender in our custody“, we see the issue. He ‘wanted’ to get captured (massive speculation on my side), more importantly in that time frame he could not have done the digital part. It shows that he was not alone in this; there was a support system in place. Another source gave us that this had been planned for two years. That might hold a truth, but the entire setting with the Bangladesh Cricket team a mere 50 meters away gives rise to slightly bad timing, this means orchestration. It is massively unlikely he had all those parts available. In this the politicians are making matters worse. This is seen with: “Technology platforms, including Facebook Twitter and YouTube, are also facing growing criticism from politicians over their failure to prevent the gunman live streaming the shootings on the internet and subsequently allowing the sharing of the video“. This is seen with the Twitch statistics that report “As of May 2018 there are 2.2 million broadcasters monthly“, that comes down to 72,330 streamers every day, there is no technology that will monitor it; there is no AI that could intervene. That solemn common sense moment makes the involved politician part of the problem, not part of the solution. Consider that out of all 0.000138% uploads one is optionally an extremist (this implies one extremist every day), so the number ends up being 0.000003% is optionally too dangerous. We cannot get politicians to put in the effort of keeping up a decent information system that is 75%-80% efficient and they demand 99.999997% efficiency from technology platforms? Politicians have become that delusional. And in addition, there is no way to get them all aboard, making it an exercise in technology discrimination, so in light of what the newspapers get away with, we see no validation on these politicians being loud to get some limelight.

The ‘evidence’ that he did not act alone is seen with “She also revealed that the gunman emailed a copy of a manifesto, which outlined his extreme right-wing, white supremacist views, to her office nine minutes before the attack began. She said it did not include a location or specific details that might have enabled authorities to respond faster. The manifesto was also sent to media groups“, the flaws and other parts showed that his agenda was not some clockwork orange, and the expression fits. When you consider “something bizarre internally, but appearing natural and normal on the surface” we see the larger failure. His actions, his manifesto and his preparations, bizarre on several settings, yet he raised no flags. This is not an attack on the intelligence groups (not this time anyway), yet to do all this, to not raise flags, that requires training and coaching. Even if he was super paranoid, the weapons and ammunition required would need all kinds of assistance (optionally from the criminal elements), but when someone buys all this hardware and ammunition, there is a trail, there are other paths that would have raised a flag or two, yet apparently he had none, this can only be done if others did part of that; an IT ‘friend’ setting up the accounts, the scripts and the stage of forwarding all the images and streams to multiple locations. Was the setting of the Cricket day predetermined? That might have been very likely, yet to know where they would all go for the religious service, how did he get that information? Too many elements cannot be answered with ‘lucky’. My point of view becomes a lot more acceptable when we see: “In the first 24 hours we removed 1.5m videos of the attack globally, of which over 1.2m were blocked at upload” and that was only Facebook, so they blocked less than half at upload, yet the amount of uploads and sharing gives rise to a much larger issue and even as we accept that many are not from extremists, merely from people forwarding what they saw, this was ONE channel. 4Chan, 8Chan, YouTube, Twitch, Twitter links, the list goes on and all can link to one another. This was more than being prepared; Brenton Tarrant had either direct support or a support system at his disposal. They are not the same yet at present the police and the Intelligence community cannot answer which is which. In that same light, I am not entirely sure if tightening gun laws will solve anything. It is so easy to look at guns and their laws, yet the oldest rule applies. Guns do not kill people, people kill people.

In this we must admit that PM Jacinda Ardern has a close to impossible task at present, not merely because of how rare gun violence is in New Zealand, it is the response that some of the media is giving. From my personal point of view some are facilitating to anti-Muslim events. I see the Dutch Telegraaf and the UK Daily Mirror as direct evidence of this. If there was a united front the news would have reported it as such, yet as one twitch was not stopped and 100% more in news coverage was able to give a presented minimised violence footprint, we can say that the technology platforms are a lesser concern than the media is currently showing to be.

It is in that same view that I oppose: “Terrorism experts said the Christchurch attacks showed there was a need for police to focus more on far-right extremism“, I oppose it because the statement is against one successful attack. The issue is not the person; most extreme right people tend to be dumb as fuck (a mere casual observation on American far right wing elements). The elements that made this a success is more important, the timeline, the hardware and the software shows that Brenton could not have done this alone, even if he did do most executions alone, someone taught him to remain under the radar; especially when it comes to the weapons, the ammunition, the IT requirements, the streaming and editing. He would have been on someone’s radar, the fact that he was not makes it a larger issue, not merely some extreme right issue. I can to some extent agree with Jose Sousa-Santos, director of the Strategika Group when I see “there may exist within the security and intelligence community an institutional culture in which Muslim, indigenous and activist individuals and groups are perceived to be the greater threat to national security than right-wing extremism“, yet that does not deter from the fact that Brenton should have been flagged at least once, the fact he was not gives rise to the larger concern of support towards his actions.

So in the end The Financial Times got a lot right, yet the title will remain under debate making it a much larger issue for Mike Bush and Rebecca Kitteridge for the foreseeable future.

Filed under IT, Media, Military, Politics