OK, I have made predictions in the past and most were close to spot on, some were just a little off, yet I had not ever for the life of me gotten it wrong by half a billion before. In ‘First the Soft‘ at (https://lawlordtobe.com/2019/04/27/first-the-soft/), I made the prediction: “we now see that Avengers: Endgame is heading towards a 700 million opening weekend (globally) is no stretch, it would make it the largest opening weekend in history“. Some claimed I was being too optimistic, perhaps I was at that a little; I now see from several sources that the estimate was off by a lot. The sources mostly re-quote Variety and when we realise that the reality of “According to Variety, ‘Avengers: Endgame’ pulled in $350 million in the US and an incredible $1.2 billion worldwide in its first weekend. This smashes the ‘Avengers: Infinity War’ take by over $500 million“, we can agree that my thoughts on it being the best Marvel movie ever is not even close to the mark. The movie is now listed on 18th position of the best money making movies ever on a global scale, from naught to 18 in one weekend. This now implies that the movie could shoot to 3rd position in a week, optionally replacing Titanic in 2nd place, it is a record that James Cameron held for 21 years, and he also held the number one spot for 10 years which is now in equal danger of getting surpassed by Avengers: Endgame soon thereafter. I believe that will happen, yet the speed at which this could be happening at has never been seen before.

This news is actually more important than you might think. You see Hollywood is nothing if not revenue driven, so there is every chance that my beloved comic books form the 70’s and 80’s will find themselves to the big screen or some Netflix streaming channel. This is both awesome and optionally sad. When the money makers see the amount of money Marvel just grossed, it will make them step into the fairway and claim their own billions. The sad part is that there is every chance that people will concentrate on their dollar shaped pupils and forget that Avengers: Endgame is the result of 11 years and 22 movies, so whatever they do they need to be careful not to squander the option they would acquire. 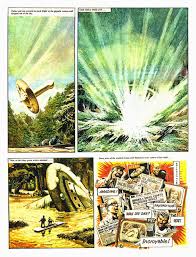 One of the front runners in this would be the work of Don Lawrence. He became famous with the works of the Trigan Empire as well as Storm. The Trigan Empire has everything to become stellar, it is placed in what would be a ‘Nova Roma’ A roman empire but in the 21st century, so we get decadence, martial impact (for references see the Spartacus series), direct encounters (read: sex, combat and confrontational resolutions) as well as other elements making it highly desirable to the watchful eyes of millions. Getting it right would be an essential part in all this. Remember, that I Claudius failed in the first attempt until it was done right in the 70’s.

In second place there is the Spanish artist Segrelles who gave us ‘El Mercenario‘, a little more fantasy, but most pleasing to the eye in more than one way. It is utterly lacking realism (the dragons are a dead giveaway) but the stories have been intriguing since the beginning and the art has a certain flair that does go with the need for excellent story telling.

I am not giving you a top three. There are so many considerations. There is the Flash Gordon from the 70’s, there is Diabolik, although in this case it seems that Murdoch’s European pay-tv operation are already on that case, so I reckon that if they make that one dark enough, they might have an instant hit. This all has one additional benefit for me, there is every chance that someone will consider reprinting the comics by Angela and Luciana Giussani, a win-win for all. I believe that technology was the greatest push here. Now that special effects can set the stage more closely to what the comic book makers envisioned and gave to their audience, the sky has become the limit and as we see more and more revenue towards streaming, there is every chance that the biggest delays will be finding the actors committing to a series and finding the right actors, manpower will become the largest obstacle for moviemakers in the foreseeable future. I will happily volunteer there, but I know I am no Inspector Ginko (or inspector Gadget for that matter). 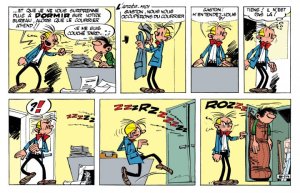 Yet we can also look into the other direction, for that we merely need to seek out André Franquin and his office boy Gaston, every company seemingly has one and therefor would bring instant joy, laughter and entertainment on a global scale, all mostly untapped ideas as American Netflix has been too localised in their searches (as well as the method of finding new stuff). Yet with Disney Plus on the horizon and other players like Stan making more and more waves, we might see a bidding war for the IP rights of these works soon enough.