The Good, the Bad, and North Korea

This article is late in the making. There is the need to be first, but is that enough? At times it is more important to be well informed. So let’s start with the good. The good is that if there is a nuclear blast, North Korea need not worry. The game maker Bethesda made a management simulator called Fallout Shelter. You can, on your mobile device manage a fallout shelter, get the goods of food, energy and water. Manage how the people procreate and who gets to procreate. Fight off invaders and grow the population to 200 people, so with two of these shelters, North Korea has a viable solution to not become extinct. The bad news is that North Korea has almost no smart phones, so there is not a device around to actively grow the surviving community. Yes, this matter, and it is important to you. You see the Dutch had some kind of a media tour around 2012. There were no camera’s allowed, still the images came through, because as the cameras were locked away, the military and the official escorts were seemingly unaware that every journalist had a mobile with the ability to film. The escorting soldier had never seen a smartphone before in his life. So a year later, we get the ‘fake’ news in the Dutch Newspaper (at https://www.volkskrant.nl/buitenland/noord-korea-beweert-smartphone-te-hebben-ontwikkeld-niemand-gelooft-het~a3493503/) that North Korea finished ‘their’ own local smartphones. This is important as it shows just how backwards North Korea is in certain matters.

The quote “Zuid-Koreaanse computerexperts menen dat hun noorderbuur genoeg van software weet om cyberaanvallen uit te voeren, zoals die op banken en overheidswebsites van eerder dit jaar. Maar de ontwikkeling van hardware staat in Noord-Korea nog in de kinderschoenen“, stating: “South Korean computer experts believe that their northern neighbour knows enough of software to instigate cyber-attacks, such as those on banks and Government websites earlier this year. But the development of hardware in North Korea remains in its infancy“. I believe this to be a half truth. I believe that China facilitates to some degree, but it is keeping its market on a short leash. North Korea remains behind on several fronts and that would show in other fields too.

This is how the two different parts unite. You see, even as America had its hydrogen bomb in 1952, it did not get there in easy steps and it had a massive level of support on several fronts as well as the brightest minds that this plane had to offer. The same could be said for Russia at the time. The History channel of all places gives us “Opponents of development of the hydrogen bomb included J. Robert Oppenheimer, one of the fathers of the atomic bomb. He and others argued that little would be accomplished except the speeding up of the arms race, since it was assumed that the Soviets would quickly follow suit. The opponents were correct in their assumptions. The Soviet Union exploded a thermonuclear device the following year and by the late 1970s, seven nations had constructed hydrogen bombs“, so we get two parts here. The fact that the evolution was theoretically set to 7-10 years, the actual device would not come until much later. The other players who had nowhere near the academic and engineering capacity would follow close to 18 years later. That is merely an explosion, something North Korea is claiming to consider. With the quote “North Korea’s Foreign Minister has said the country may test a hydrogen bomb in the Pacific“, we need to realise that the operative word is ‘may‘. Even then there will be a large time lapse coming. Now, I am not trying to lull you into sleep. The fact that North Korea is making these steps is alarming to a much larger scale than most realise. Even if it fails, there is a chance that, because of failed safety standards, a setting that is often alien to North Korea, wherever this radiation is, it can impact the biological environment beyond repair; it is in that frame that Japan is for now likely the only one that needs to be truly worried.

All this still links together. You see, the issue is not firing a long range rocket; it is keeping it on track and aiming it precisely. Just like the thousands of Hamas rockets fired on Israel with a misfiring percentage of 99.92% (roughly), North Korea faces that same part in a much larger setting. You see ABC touched on this in July, but never gave all the goods (at http://www.abc.net.au/news/2017-07-06/north-korea-missile-why-it-is-so-difficult-to-intercept-an-icbm/8684444). Here we see: “The first and most prominent is Terminal High Altitude Area Defence, or THAAD, which the US has deployed in South Korea. THAAD is designed to shoot down ballistic missiles in the terminal phase of flight — that is, as the ballistic missile is re-entering the atmosphere to strike its target. The second relevant system is the Patriot PAC-3, which is designed to provide late terminal phase interception, that is, after the missile has re-entered the atmosphere. It is deployed by US forces operating in the region, as well as Japan.” You see, that is when everything is in a 100% setting, but we forget, North Korea is not there. You see, one of the most basic parts here is shown to undergrads at MIT. Here we see Richard C. Booton Jr. and Simon Ramo, executives at TRW Inc., which would grow and make military boy scouts like Northrop Grumman and the Goodrich Corporation. So these people are in the know and they give us: “Today all major space and military development programs recognize systems engineering to be a principal project task. An example of a recent large space system is the development of the tracking and data relay satellite system (TDRSS) for NASA. The effort (at TRW) involved approximately 250 highly experienced systems engineers. The majority possessed communications systems engineering backgrounds, but the range of expertise included software architecture, mechanical engineering, automatic controls design, and design for such specialized performance characteristics as stated reliability“, that is the name of the game and North Korea lacks the skill, the numbers and the evolved need for shielded electronic guidance. In the oldest days it would have been done with 10 engineers, but as the systems become more complex, and their essential need for accuracy required evolution, all items lacking in North Korea. By the way, I will add the paper at the end, so you can read all by yourself what other component(s) North Korea is currently missing out on. All this is still an issue, because even as we see that there is potentially no danger to the USA and Australia, that safety cannot be given to China and Japan, because even if Japan is hit straight on, it will affect and optionally collapse part of the Chinese economy, because when the Sea of Japan, or the Yellow sea becomes the ‘Glowing Sea’, you better believe that the price of food will go up by 1000% and clean water will be the reason to go to war over. North Korea no matter how stupid they are, they are a threat. When we realise just how many issues North Korea faces, we see that all the testosterone imagery from North Korea is basically sabre rattling and because they have no sabres, they will try to mimic it with can openers. The realisation of all this is hitting you now and as you realise that America is the only player that is an actual threat, we need to see the danger for what it is, it is a David and Goliath game where the US is the big guy and North Korea forgot their sling, so it becomes a one sided upcoming slaughter. It is, as I see it diplomacy in its most dangerously failed stage. North Korea rants on and on and at some point, the US will have no option left but to strike back. So in all this, let’s take one more look, so that you get the idea even better. 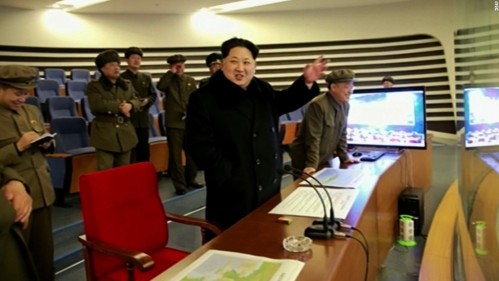 I got this photo from a CNN source, so the actual age was unknown, yet look at the background, the sheer antiquity that this desktop system represents. In a place where the President of North Korea should be surrounded by high end technology, we see a system that seems to look like an antiquated Lenovo system, unable to properly play games from the previous gaming generation, and that is their high technology?

So here we see the elements come together. Whether you see Kim Jong-un as a threat, he could be an actual threat to South Korea, Japan, China and Russia. You see, even if everything goes right, there is a larger chance that the missile gets a technology issue and it will prematurely crash, I see that chance at 90%, so even as it was fired at the US, the only ones in true peril are Japan, South Korea, Russia and last China, who only gets the brunt if the trajectory changes by a lot. After which the missile could accidently go off. That is how I see it, whatever hydrogen bomb element they think they have, it requires a lot of luck for North Korea to go off, because they lack the engineering capacity, the skills and the knowhow and that is perhaps even more scary than anything else, because it would change marine biology as well as the aftermath as it all wastes into the Pacific ocean for decades to come. So when you consider the impact that sea life had because of Hiroshima and Nagasaki for the longest time, now consider the aftermath of a bomb hundreds of times more powerful by a megalomaniac who has no regards for safety procedures. That is the actual dangers we face and the only issue is that acting up against him might actually be more dangerous, we are all caught between the bomb and an irradiated place. Not a good time to be living the dream, because it might just turn into a nightmare.

Here is the paper I mentioned earlier: booten-ramo

Filed under IT, Military, Politics, Science