The Guardian has another story, which was updated a mere 6 hours ago. To be honest, I am a little ticked off. I get that the Guardian is giving us this and it makes perfect sense, it is news. Yet when I see ‘Fake news inquiry: Facebook questioned by MPs from around the world – as it happened‘ (at https://www.theguardian.com/technology/live/2018/nov/27/fake-news-inquiry-facebook-to-face-mps-from-around-the-world-mark-zuckerberg-live-updates), whilst in the same setting we see newspapers ‘hiding’ behind ‘from an unnamed source’, when we get blasted by well over 64 million results in Google Search on the death of a journalist that close to nobody gives a hoot about, the entire ‘fake news‘ seems to be nothing more than a targeted sham to me. Not the element of fake news, I get that, but some of the players are a little too hypocrite to my liking.

So let’s take a look at a few of these issues we see (at https://www.theguardian.com/technology/2018/nov/27/facebook-fake-news-inquiry-the-countries-demanding-answers).

Ireland: “The Irish government is reviewing proposed legislation to promote online safety amid an outcry that tech companies are unable or unwilling to tackle harmful content. The move jars with Dublin’s normally effusive support for tech companies with an Irish base. Facebook has its European headquarters in Dublin and falls under the remit of Irish data protection authorities“. The first thing to do is look at the definition. The European commission gives us: “Harmful content, is authorized material subject to distribution restrictions (adults only, for example) or material which some users may find offensive even if, on the grounds of freedom of speech, there are no restrictions on publication.” First of all, the Pornhub site is freely available to every man, woman and child. In addition there is a porn version of YouTube that is also freely available, from that we can see that Ireland has a lot of other worries and these two are not available through Facebook. When we look at Ireland we see a nation that given in to big business through tax laws at the drop of any hat and they have harmful content issues? In addition the Times gave us on November 6th: “Google and Facebook will call on the government today to define exactly what kind of content a proposed digital safety commissioner would have the power to remove online.” It becomes a lot more entertaining when we see in Fine Gael last week: “Fine Gael TD Hildegarde Naughton will travel to Westminster next Tuesday (November 27th) for a meeting of the International Grand Committee on Communications”, as well as ““Social media companies cannot hide from the genuine concerns of national parliaments from around the globe, it is imperative they engage with us in a meaningful way. “This document sets out a blueprint for how that can be done.” It is entertaining as she seemingly has a document whilst this entire setting has been going on for years (even before Cambridge Analytics). That entire meeting is in my personal opinion as hollow as it sounds. All trying to look important, yet where is that so called document from Hildegarde Naughton? It does not seem to be on the HN site (at http://www.hildegarde.ie), so where is it? When we are told: ‘This document builds upon the work done by the Oireachtas Communications Committee‘, we should be able to read and scrutinise it. You see, the Irish Law Reform Commission has a 2016 document (at https://www.lawreform.ie/_fileupload/Reports/Full%20Colour%20Cover%20Report%20on%20Harmful%20Communications%20and%20Digital%20Safety.pdf), it is merely that or a continuance of that? And this document is important, especially on page 165 where we see: “The definition of “communication” implements the recommendation in paragraph 2.53 that the proposed legislation on harmful communications should apply to all forms of communication, whether offline or online, analogue or digital, and therefore the definition includes communication by speech, by letter, by camera, by telephone (including SMS text message), by smart phone, by any digital or online communication (including the internet, a search engine, a social media platform, a social media site or the world wide web), or by any other telecommunications system.” 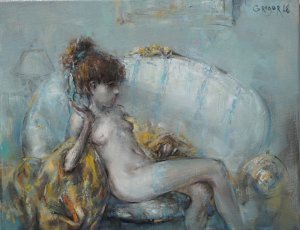 This now implies that art is now no longer merely in the eyes of the beholder, basically if any art is regarded as harmful content, is comes under scrutiny (read: censoring) A massive part from Facebook is relying on art to propagate via digital medium, digital art is still in its infancy and it seems that this offends Ireland in the broader view it has, it is in that view that my message to Hildegarde Naughton is seen (at https://www.independent.ie/irish-news/courts/priest-who-sexually-assaulted-girl-6-during-first-confession-avoids-jail-due-to-old-age-and-health-problems-36840577.html). When we contemplate that when you have health issues and you are old, it seems fine to rape a six year old. It is all in the nuance, is it not? So, what will you do when you consider this Grigor Malinov painting to be harmful content? Add a Jade Swim bikini with a brush and a fashionable colour? In light of what certain people get away with, the entire harmful content is not a joke, yet hammer Facebook with it, whilst there are other players openly in the field is too weird as I personally see it.

Then we get a Turkish advertisement variant with ‘MPs do not intend to publish Six4Three documents today, Collins says‘, either you have the documents and you inform the public, or you go home and polish your silverware! You scream fake news and leave the audience in innuendo and what I personally perceive as intentional miscommunication, and haven’t we seen enough of that?

I can’t resist, whenever I see a Canadian flag, a Canuck or anything Canadian I think of that South Park song. It’s nothing negative, I think that Canada is awesome in hockey, it seems to have great people (several attended UTS with me) and it seems to have a healthy life. I’d take a job in Canada any day if possible (as well as the opportunity to watch Hockey almost every night), I might even be good enough to be a goalie for one of their NHL teams, even though I am nowhere near Martin Jones as a goalie (I merely wish I was). So Canada gives us: ‘Facebook inflated video viewing times for two years‘, I actually see an issue here, the Guardian gives us “only counting views lasting more than 3 seconds, the time a video must be seen to count as a view“, yet with YouTube the skip moment is 5 seconds an now as some people get 100% more ads with many of them not with the option to be skipped we see a shifted trend. This might be YouTube, yet there is no chance that this does not affect Facebook, giving rise that Canada has as optional a valid issue. Richard Allan (Facebook) gives us: ““it depends on the problem we’re trying to solve”“, something that might be valid, yet in the question by Charlie Angus we see: “Facebook has inflated video metrics, overstated for two years. “I would consider that corporate fraud, on a massive scale,” he says, “and the best fix is anti-trust. The simplest form of regulation would be to break facebook up, or treat it as a utility, so that we can all be sure that we’re counting metrics that are accurate or true.” I see his failure as a setting as there is a large intertwined part of Facebook, Vines, YouTube and a few other medium adding fuel to the video metrics, no matter if all hosted on Facebook. You would have to set the stage for all and to merely have Facebook here is a faulty stage, we get pushed into an assumption pool of no facts and biased metrics making matters merely worse. I feel certain that Charlie Angus should have and probably did know this making the issue a tainted one on more than one level.

Finally, let’s go out with a bang and add Latvia to the stage. When we get Latvia’s Inese Lībiņa-Egnere, we get the question: “how Facebook can help countries like Latvia, that face specific threats from Russia“. It took me around three minutes to stop laughing, I should be serious, but I cannot hold my straight face. You see, that is not the job of Facebook. I will go one step further, by stating: “Dear Inese, have you considered adding digital responsibility to both the Drošības policija and the Militārās izlūkošanas un drošības dienests?” There is an unconfirmed rumour that one of your routers is still set to ‘Passw0rd‘ and another one to ‘Cisco123‘, can you please confirm that? In light of the fact that ‘https://www.zs.mil.lv/lv/kontakti‘ directly links to Facebook pages, one might see how the Latvian military (as well as Latvian intelligence) could get phished in several ways, especially when there is the chance that some alleged under dressed biker chick would have been looking for ‘adventurous officers’. It gets to be even more fun when that alleged woman look a lot like a vogue model. You should introduce them to: (https://heimdalsecurity.com/blog/fake-facebook-scams/), to have Common Cyber Sense is a government’s responsibility. Getting Facebook to do free consultancy via a hearing is just not Cricket.

I will end this with Brazil, I really liked his question: ‘He asks what Facebook is doing to prevent improper manipulation of its algorithms to prevent illegal manipulation of elections‘. It is a good and important question. I think the newspapers, especially the tech columns should spend space on this and let Facebook show them what is being done, what the impact is, how those metrics were generated and how its validity was checked. I think that the problem is a lot larger than we imagine. I would set a line towards American soft money. It has never been regulated and it still is not. We talk about fake news and political influence, whilst soft money is doing that in the US from the day after a president is elected all the way up to the next presidential election (or the senate, or congress). It is basically shouting at one, whilst the other element is ignored. The difference is that digital campaigns give anyone all the soft money they need, taking the rich out of the equation, the fact that I have not seen anything towards these lines gives a larger implied weight on all media. All those newspapers with ‘from an unnamed source‘ and that is where the blockage begins. There is a setting that it is not the ability or Russia, but the failing of others not correctly countering digital media that is the problem and that was never a Facebook problem, it merely shows the incompetence of others and in an age of advanced nepotism it is a much harder pill to swallow.

In all this, I never claimed that Facebook is innocent, merely that there is a lack of the proper questions making it to the table and even as a few nations were addressed, the issue is a lot larger and needs addressing, preferably before the 5G tap opens which allows the digital media providers to deliver 500% more than it is delivering now.

I wonder how many players have considered the impact of that game changer.