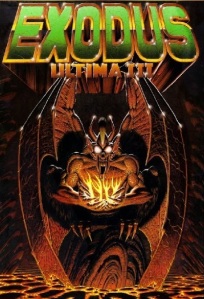 Yesterday’s article in the Guardian by Alex Hern is a bit of a wakeup call. When I re-read the article I start to agree with him more and more. As a gamer, RPG’s have been my life. This started in the old days with the Ultima series by Richard Garriott on CBM-64. The first full game experience was the third installment. On the CBM-64, the quality was a little less then you see now, but the entire experience was amazing. This game made me addicted to RPG’s for life and Ultima 4 made matters worse for me. I was lucky; some RPG’s will never have the amazing depth that the Ultima series offered, not for at least a decade.

Yet Alex asks the important question: ‘are role-playing games getting too predictable?‘ When I sat down I did exactly that, try to avoid predictability. In my version of TESVI I was at all times considering replayability. As such the creation required sidesteps, not to be reflectively repetitive, but to set the stage of 100 missions at least twice over, so you did not play two versions of a mission, but two very different missions. It allowed for the market value of a game to remain high, whilst at the same time give other players something to think about. I had been there. I must have played Oblivion 3-4 times all the way through the end. Yet at heart it remained repetitive, so my design was the thwart that nuisance. Skyrim was a little the same in many ways, and Skyrim even as it outperformed Oblivion by a large amount had a few issues, some slightly terminal, but with a game that large it is almost unavoidable (I did say almost). So if we open The Elder Scrolls to number 6 a lot more was required, and as I set the model in play (not the one Bethesda is releasing) I remained dedicated to what Bethesda will offer, because so far they have not disappointed me (this is NOT about Fallout 76). So as we see the push towards the outer Worlds, we are given: “In this world, where mega corporations are starting to take over alien planets, you can act like a hero, an opportunistic mercenary, or a total idiot. The writing is sharp, snappy and funny, the world exciting and vibrant, and there’s a classic New Vegas interplay between factions of characters, any of whom the player can help or hinder“, I am not questioning, not judging, and not placing a verdict. I await the final result that is open for review and purchase. The writer (at https://www.theguardian.com/games/2019/aug/20/from-cyberpunk-2077-to-the-outer-worlds-are-role-playing-games-getting-too-predictable) is giving us a lot more. So when the article ends with: “But their genre needs its Breath of the Wild moment: an outsider to toss out the conventions, and build something beautiful from what is left. Surely choosing between shooting, stealthing or sweet talking can’t be the only options that the next generation of virtual worlds have to offer“, I find myself agreeing with him to the part that games (at times) need more. Yet is that in part the limitation of an RPG? What if we take another look at the Ultima range? Ultima 7, the Black Gate is one of the few games that EVER received a 100% rating from me (on PC). In that time (1992) that game surpassed anything else, and others never came close to what The Black Gate offered. So when we see the part ‘shooting, stealthing or sweet talking‘, we need to consider alternatives. There was the option of getting a job (so not shooting and killing), stealing (stealthily not working), and Retail industry (not sweet talking). In part we saw the retail on Skyrim by selling (just like in Oblivion), in Fable 2 and 3 we see the option of doing jobs and gaining money that way, even buying the place and getting the revenue, so we have seen it (almost) all. Yet what happens, when the world is truly a lot larger? What happens when your impact is seen as one of thousands creating commerce and in that way create price fluctuations? What if the game needs to be set to the larger premise? To get one part right, and through the linked limitations create a new system of balances to get the whole environment correct? Make the game impact seen through the changes that not just you create. As a member of the thieves guild you can never be a companion, or with the fighter guild or the Mages guild. So what happens when we take a much larger bite out of the apple of gaming and actually set the apple to be an actual much larger play of impact? The apple of knowledge (Eden), the golden apple (Olympus) and the apple of immortality (Asgard), set the stage where you can merely choose one of them, creating a tripod where one leg is rigid and the other two vary to create some form of balance.

What if one choice demolishes the others and through that path offer 300% more? There is still the challenge of making all missions decently unique and challenging, and if you realise that the Skyrim guide is over 1100 pages, we are facing a serious clambake, not a mere picnic. It was the largest stage setting, so whatever I considered to be the design of TESVI, needed to be able to surpass that, and I mean by no less than 20%.

Now, this does not mean that boredom will not set in, the biggest issue with any RPG is the danger of grinding, and preventing that is a first. Most games have become decently adept in minimising that risk, yet it is not zero, even my version would not have zero grinding, so the need to remain long term appealing is essential. The game does not stop there. Now that the gamers soon get Google and Apple with streaming gaming, the game changes even more and finding original content in any RPG game is the essential search for every gaming junk (I am proudly part of that family), so basically the ante is upped by a fair bit. It becomes even more impressing as I look to more challenge and the Skyrim guide has 350 quests, which implies that in my book, I will need close to 800 missions to keep head of the curve and in all this, anyone getting the range of 800 quests is less interactive in what we see and the mountain of work we look up to. It also requires very different IP to continue on a higher level of gaming.
The second level of grinding is often the places where things are found. In many situations we needed to get to the same places (shouts) and we needed to find essential hardware, however if the word wall did not contain Kyne’s Peace, but a random shout? In addition, what happens when you influence the entire game by making another choice as to where the Fighters Guild, the Thieves Guild, the Dark Brotherhood and the clan of Minimarco is placed (Necromancers), more important when you shape the game as you play and the impact is seen on a larger scale. A stage where the trade route from Skingrad, via Arenthia, to Riverhold, Orcrest, Rimmen and Bravil takes another step as the Fighters guild is placed in Riverhold and not in Rimmen, these are all choices that shape a world you live in. Consider the real (non-virtual) world if not Brussels, but Paris had become the centre of the EU, it would massively impact Belgium economy negatively and France’s economy positively, the direct aftermath is that living in Paris would be almost impossible, cause and effect in play. That same setting might be applied to gaming. Where the aggregation of the lowest and highest 1,000 gamers sets the parameters of your RPG game. a game not set in stone, but in motion as 2,000 players are not set to the average, but on the outliers of the high and the low players, a game that is shaped by all as the economic footprint changes. Yet to prevent deal seekers, we make time a much more definite in any RPG game.

As the measure evolves over time, other players become part of the low and the lower high end. A game now in flux, no longer rigid and confined. Add to that that they all might have issues on some of the resurrection choices and we get an entirely new path towards gaming. Boredom can only start to set in when the game is fixed, so we start by setting change to the game itself. A second choice is to add a management part, not just overall, but a specific super large quest, where you cannot complete the quest, but you provide the options for the quest. I can no longer sneak in like William Tell grasping apples, now we create a workforce working the field and still we are involved to maximise what is possible. Yes, we need virtual worlds that have more and differences to offer, but the best option is allowing evolution in ways that we cannot set, we might be able to influence them towards 6%, impacting but not overwhelming. That too allows for a game to be enjoyed again and again. That is the kind of RPG all RPG players want and yet up to now, no one delivered that option, it is surprising and perhaps it will be the cornerstone of any RPG, the amount that cannot be predicted, for all those coming from the very bottom of the maze and interesting challenge to face.

For now we await The Outer Worlds and Cyberpunk 2077 to make it into the family of RPG fanatics, yet we too await the next Elder Scrolls, and who know, perhaps my idea makes it into The Elder Scrolls VII, as a gamer I can only hope to be given the chance to change the game for thousands of RPG lovers in a new never seen before direction. Even as I accept that this is almost not possible and I would settle for a ‘novel’ place in new original gaming, we need to see that it all has been done before, well, it almost all has been done before. Yet so far, the idea’s I had have not popped up anywhere, so I am sitting pretty for now.

I actually do not care whether someone else finds them and implements them; it means new and original gaming, the ultimate rush for an RPG gamer, preferably additions done to a game that the gamer loves. So Alex Hern is correct and the first step in avoiding all this is to make sure that we take a non Ubisoft approach to gaming, I have faith that Bethesda can do that, they might have missed the ball with Fallout 76, but still, they took it in a direction that had not been done before. Let’s not forget that before Nintendo gave us the Switch, we were given the WiiU. Everyone gets to have a bad day and when we realise that Bethesda have given us winners from 2002 onwards, over a dozen clear winners in 16 years, the existence of one less popular title (Fallout 76) with so many winners is not an issue at all, in Bethesda we trust, the rest can take a number and await their turn with the global RPG population.