The E3 is now 4 weeks away, we see more leaks and a few confirmations. Most confirmations are to counter the ridiculous statements we have seen in the near past. Statements like: ‘we could see a first announcement of the new PS5‘, utterly ridiculous from the first moment it was voiced. The PS4 and PS4Pro are doing just fine at present, there is no need for new hardware, especially with all those games that are coming. Places like the UK Daily Star, who gave us ‘THE SONY PS5 console is coming – eventually – but some BIG E3 2018 news revealed this week could give us our biggest hint yet for when Sony will release a PlayStation 5 games machine‘, with ‘eventually‘ they cover their setting of utter stupidity. It is basically on the same level as ‘If we have unprotected sex the coming year every night, you might end up being pregnant at some point‘, it is on that level we need to see this. As stated previously, the Nintendo Switch will release 28 games between now and August 2018, that is rather huge, some of these titles have been revered for the longest of times, so the current owners are already hyped and if that was not enough, it is also hyping those who want one, so that is working for Nintendo at least twice over. In that regard, another source gave us earlier this month “Microsoft Won’t Release Xbox One Sales But Claims There’s Been Growth … as a key indicator of our success and will no longer report total console sales“, the upcoming degradation to third position has shaken Microsoft to the core, even as we accept ‘There’s Been Growth‘, the issue remains that there will always be growth, there will be an interest in buying an Xbox One, it is not a bad system, merely a flawed one and in that regard, it still has games, good games too. What is remarkable is the entire setting change within Microsoft. You might remember on how it was not a gaming system but set as an ‘entertainment‘ system for the whole family, which bites even more when you realise that some top boxes offer well over 100% more storage, so the ladies can get all 6 seasons of Sex in the city, whilst the partner can hold onto his entire NHL annual season games. Yet beyond that, when we dig deeper, we see that Microsoft fumbled yet again. In this case I must stand up for Microsoft in its defence (just a little), the market was suddenly overwhelmed with all kinds of Fetch options and recording of TV shows. It took a bigger leap as some offer Netflix, Stan, National Geographic and ABC iView whilst it will not count towards the data usage, which for the Netflix addicted is the sales pitch of the century. The fact that some offer mobiles a special deal that now includes a set top box is just a bonus. Microsoft will not be offering the Xbox One X for a mere $80, will they? That is not their fault, it is my personal belief that those offering these deals know what the data value of a consumer is, and this started merely a year ago, years after the console was released.

So when we go back 3 years (for the comparison), take a look (at https://www.onmsft.com/news/xbox-one-more-all-one-home-entertainment-ever), where we see: “Where media entertainment and television integration were the first talking point announcing the Xbox One, they are now on the back burner. Gaming has taken its rightful place as the emphasis of Microsoft’s gaming console. At E3 Microsoft didn’t focus on anything related to cable television or media streaming, they focused on their library of games, and gaming features such as Xbox One backwards compatibility with the Xbox 360. And that’s smart of them to do, but that doesn’t mean the Xbox One isn’t a home entertainment system. In fact, it’s even more of one than when it was initially announced“, which is all true and fair, yet as I basically stated about 2 months BEFORE that date, when you rely on a 1TB drive, whilst for the consumer the difference between the 1TB drive and the 2TB drive was at that point no more than AU$27, meaning that the difference for Microsoft would be a lot smaller, so why be so stupid to settle on 50% storage? I believe that their sense of pushing people into the Azure cloud never faded, it merely bites them now as we see data collecting abuse (Cambridge Analytica is one among many). That set off the gamers in the same way that ‘always online‘ did, and there is not denying it, it hurt Microsoft bad. Now, do not think for one minute that Sony would have been any better, because it took a while for them to back paddle the offline achievements, but they did and Microsoft did not (well only partially). From my point of view to some extent, the Xbox One offered in some ways less than the Xbox360 did.

Even Nintendo Switch would at some point make an error or two, but in all this the Xbox was the worst, even as we see news left, right and centre, and we see gossip on those same three paths, I am trying to see the reality and report on that. Yet in the end, we are still unsure what big whoppers Microsoft will offer during the E3 and that really matters. Even as we now see that Sony and Nintendo are ready to hit it out of the ballpark during their presentation, we still do not know how ready Microsoft is, because that is at the heart of the mounting pressure; The Daily Star gave us last week “It’s a great time to be a gamer and to be a part of Team Xbox. We’re hard at work on exciting plans for E3, from what will be a great briefing filled with new games to the fan experience at the Microsoft Theater. This is our biggest E3 yet, and we look forward to a great week for gamers“, it sounds cool but there is no beef on the bone of rumours, so we will have to wait another 4 weeks.

In all this I am not alone, more and more professional gamer sites and magazines give responses like ‘Microsoft has a lot of pressure to compete with Sony’s fantastic line-up‘, that is the crux of it, Microsoft cannot hope for a homerun, it desperately needs one at present that is for certain. In this, places like Techradar give us: “Now that the Nintendo Switch is so beloved and Microsoft can boast the most powerful console on the market, we’re hoping to see Sony pull out all the stops for PlayStation this year“, Sony who started and still embraces ‘For the players‘, seems to be ready to do just that. That is the setting that Microsoft is up against. when I look at their victory there is no way around Minecraft 4K, that is not a joke, for those addicted to Minecraft, seeing the 4K version on Xbox One was jaw dropping, in equal measure Forza Motorsport 7 will boast and deliver. Honest to god, what I saw (the short part I did see), I could not tell the difference between watching an actual F1 race on Blu-ray and Forza 7 4K. So they have the goods, and there is no way that it will not drive sales for Microsoft. From what I did see, whether you are a racing fan or not, there is no way around Forza this time around, only the foolish and the dead are unlikely to purchase that game if they have an Xbox One X. Yet, will it be enough? We will know in 4 weeks, for now, there is the smallest chance that Microsoft can turn the downturn around, but it will not be cheap and they have no further room for error, because the moment we see an actual first announcements of the PS5 (I reckon in 2020) and Microsoft has not mended its way, it will no longer be seriously considered by anyone but the devoted Microsoft fans, which remains fair enough.

It is up to Microsoft to figure out whether they are in their final stretch, the only real advice I have for them is to boot their marketing department and actually start listening to the gamers, not the Azure department, the Microsoft cloud needs and whomever else could benefit, because it did not bring the Xbox department anything at all (speculative on my side). Putting Phil Spencer on top of all this was a good first step, in 4 weeks we will see what the Xbox Owner gets to play between June 2018 and December 2019, we should hope for the best for more than one reason, because from my pragmatic view, as I see it, when Microsoft properly ups the game, Sony will be forced to do the same and that is good for every gamer in the world. In that Nintendo remains the wild card, they do what they it is that gamers want and they really got it right this time around (referring to the WiiU vs Nintendo Switch),

No matter what system you are on, there will be huge announcements for every system, which is always good and those who have more than one system will have to decide on which system to buy their games more, or less. It is in the end, the gamer’s choice!

As For the E3, the spaces are set, Sony rocks the western hall, see the image below , it is right next to Nintendo, which has half the space Sony has, so that will be one hell of a bottleneck. I wonder if the media will be there asking if people have both systems. Nintendo has two more attached stands, just like Sony. An interesting setting is that Big Ben Interactive is there too, as is NVidia and at least a dozen others. In the South hall, also below it is different. Most large ones are pretty much the same size, except for Square Enix and Bethesda being slightly larger. Microsoft has a tiny presence there, but it has its own venue as stated by some ‘across the street’, There was no mention of any Microsoft at the West hall at all, implying that their small presence in the South hall is merely some stations for playing. The images are nice to see and to behold some of the names there, what is clear is that Sony and Nintendo are ready to take this to the next level, especially in light of how unrealistically expensive floor space on the E3 is. Yet the best source of released info is the site of the venue itself (at https://www.e3expo.com/). 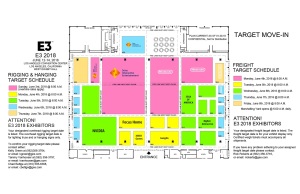 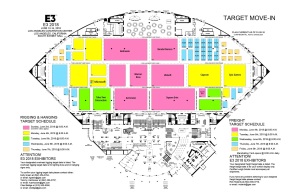 Filed under Gaming, IT, Media